Last March, we had the first Texas Sculpture Group exhibition in San Antonio at the Botanical Garden, an outdoor exhibition that was also curated by renowned British sculptor Phillip King. The Texas Sculpture Group, which is an official chapter of the International Sculpture Center, had its second exhibition in our city this month, but this time it was an indoor show. The Interior Exhibition was hosted at Blue Star Contemporary Arts Center and had its opening night along with San Antonio Painters and Sky Patterson: Solo Exhibition just a week before the Scale: Gathering of Sculptors conference.

The exhibition curated by Phillip King, showed an interesting variety of medium, scale, and concept. However, most of the pieces were conceptual, while just a few were representational or abstract. There were several works in exhibition from twenty different artists all taking over the walls and space of the smaller galleries at Blue Star: Middle Gallery and Gallery 4. The show seemed a bit crowded for the space and, since there where two other very good shows that night, the crowded opening heightened the lack of room.

The Middle Gallery housed the main focal point: an arresting installation The Price of Oil 94,375 How Many More? by Maria Cristina Jadick, which consisted of three metal barrels painted black serving as pedestals for an army soldier's uniform and two pairs of boots while the floor and background were covered by small photographs of people who died serving in the war in Iraq. This installation had all the right elements to call for attention: repetition, recognizable objects, color, scale, texture, and most importantly, concept. We often see political work addressing topics in other parts of the world, but even though there is a lot to complain about in the United States, there is a tendency in most American artists to avoid directly criticizing their government. We are more likely to see work about child labor in Asia or maybe a critique on general culture, for example, consumerism, but we rarely see direct activist political commentary these days. The relevancy of this piece was especially refreshing for San Antonio, where, besides some exceptions,  art is often times more formal than expressive or political.

There was another simple but stunning sculpture that called for attention. Pamela Jarris’ Reclaim took over the space at Gallery 4. With some beautifully aged painted wood, the artist constructed an environment where a closed wooden boxed with no lid or opening stands mysteriously. There were other very appealing pieces on the wall and off the wall as well, such as Brooke Gassiot’s conceptual piece Pleasure, which consisted of an old TV painted white playing a video of a water pot boiling on a stove while she sculpted cartoonish steam out of plaster and fabric that followed the line of the steam on the video, or Tanya Synar’s Pangea, where beautiful polished stone is placed on mirrors that abstractly resemble the coming together of the continent.

Overall, it was a great selection of work. The lack of space did play a big part on how the pieces interact with each other and it would have been nice to allow them to breathe independently. The curatorial project was successful in terms of selection; there was a great variety amongst the work. It was also a very nice project since it was devoted to sculpture, which is rare, and also because it was curated by a sculptor; a very renowned British artist. Definitely, the display was not ideal for such a great selection and even though it was great to experience the three shows together, it seems like the sculpture conference put a big pressure on Blue Star to squeeze these three very exciting shows into their space and at the end they did not have the right structure to house the three of them at the same time.

Texas Sculpture Group Interior Exhibition will be on display until August 18, 2012 for more information please go to bluestarart.org

Haydeé Muñoz De la Rocha earned a Bachelor of Fine Arts in Sculpture and a Bachelor of Arts in Art History at the University of Texas at San Antonio. Haydeé studied painting in Florence, Italy under the internationally renowned artist Eva Rorandelli. She also had the honor to study under Malaquias Montoya, a major figure in the Chicano Art Movement of the 1960s-70s, at UTSA. Haydeé Muñoz is also an international art promoter. Last January, she directed the promotion of Pancho Villa’s “Last Saddle” auction throughout México. Last year, Muñoz curated and organized the international exhibition Mexico: Rolando Rojas, Amador Montes, and Daniela Sacramento. Muñoz is currently working on an MBA in International Business at the University of Texas at San Antonio. The Founder and Director of ART Magazine is also a conrtibutor for artdaily.org and Kindform. 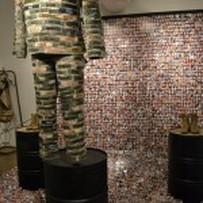 The Price of Oil $94.375 How Many More? photograph by Haydee Munoz