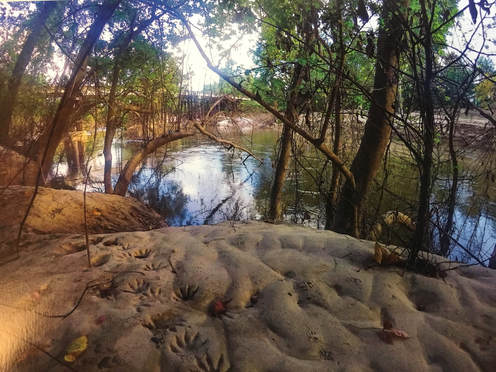 Extreme Water, Mystery Sand, is a research based, multi-disciplinary, multi-installation exhibition that combines photography, bricolage, video, sewing, printmaking, painting, sculpture and collage to address the climate variability dilemma. In the manner of “airing dirty linen,” it considers the implications, one year later, of contributory factors to the Hurricane Harvey flood disaster.  It asks: Are we all complicit?  What did we do wrong?  What changes can we make to protect ourselves and lessen the impact of the next big weather event? It begs us to care and get active.

In retrospect, we are all complicit inasmuch as we all had a “failure of imagination.”  That is, we acted as if we believed that such a catastrophic event could never hit our city and devastate us the way it did.  Truth is, extreme events can happen to anyone, anywhere at any time.  We were deniers. We allowed the proverbial “can" to get kicked down the road.  We failed to fund and execute the earlier recommendations made by the Army Corp of Engineers for needed improvements to the 70 plus year old Addicks and Barker dams.  We failed to fund and execute proper, city-drainage and road construction infrastructure development projects.  We put economic interests over human interests when we allowed inaccurate city flood maps to govern city development, and encouraged the over-expansion of city housing and growth, including the building of entire neighborhoods in floodways and flood plains without regard for the possibility of the horrific consequences of an historic flood. (One thing we can always be sure of is that Mother Nature will always surprise us!)

Additionally, the leaders of Petro/Chem/Refinery facilities planned inadequately for potential flooding and it’s resulting negative consequences.  Perhaps human concerns were again subverted to financial considerations.  In some cases we allowed the management of flood plans in accordance with least case scenarios as opposed to worst case scenarios, of which Hurricane Harvey was one.  While some Hurricane Harvey disaster contributing problems came from a lack of preparedness from climate change deniers, there were also climate change believers, who acted as if the possibility of storied intense weather patterns would become real in other places but that somehow, mysteriously, the effects of climate variability would not ever happen to us here, in our own town.  We turned a blind eye to some of the larger but necessary ameliorative actions that might have mitigated some of the disastrous Harvey impacts.  It seems that it is this same “failure of imagination” that has been the root cause of many poor decisions, inactions, judgment lapses, or catastrophes that we have experienced.

With the realization that climate variability is real and here to stay, Harvey has been a serious call for us all to look forward.   Instead of relying on inadequate models of the past, it is imperative that we make plans and preparations for what is likely coming.  Failing to do so may put us at risk of repeating the same mistakes that have already cost many lives and wreaked unacceptable havoc.