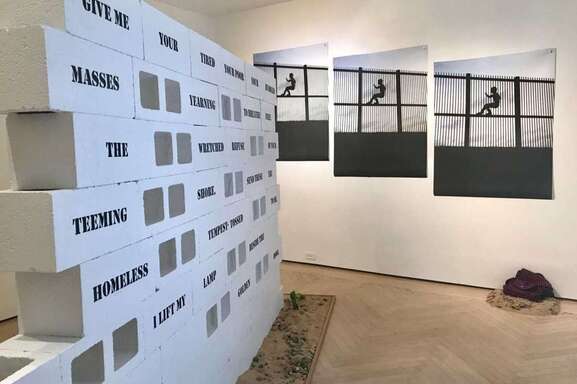 ​Houston’s population is nearly 45 percent Latino. So where is the Latino art scene?
Well, everywhere, actually — tangled into every corner of the urban fabric, yet no easier to define than the character of the sprawling, mega-diverse city itself.
Latino Art Now! Houston, an area-wide celebration that began last month and runs through May, will bring more awareness to the scope of a local talent force that spans the spectrum from highly trained conceptual artists to self- taught muralists and represents a multitude of racial, ethnic and gender identities — Chicano, Hispanic, Latino, Latina, Latinx (a gender-neutral term that can encompass all genders).
More than 70 local cul- tural organizations have filled their calendars with related events for Hous- ton’s first spring of Latino art. The catalyst is a biennial, national conference of visual art scholars — Latino Arts Now! — that the University of Houston hosts for the first time April 4-6.
Organized by the Inter- University Program for Latino Research, a consortium that partners with the Smithsonian Latino Center, the conference involves three solid days of concurrent talks on topics as varied as “Migrant Struggles Against Gentrification,” “New Digital Platforms” and “Bodies, Genders, Sexualities.”
LAN! aims to spark conversations about the creation and dissemination of Latino art that are “particularly important to global cities like Houston, where U.S. Latinos have played prominent roles in shaping artistic culture,” said Pamela Quiroz, the director of UH’s Center for Mexican American Studies and executive director of the consortium. “We’re going to celebrate both national and local Latino artists.”
More than a dozen Houston-based scholars and artists are among the 135 or so conference panelists. As part of its pre-conference field work, the consortium identified more than 250 Houston-area Latino visual artists and added them to a national registry. “We are researchers. We love data,” said art historian Olga Herrera, who was involved in that project.
Houston’s population of Latino artists looks similar to that of other major U.S. cities in one respect, Herrera said: The majority are not native to the city but have migrated from other U.S. cities or other countries, “just going where the jobs are.” That doesn’t mean fewer natives aspire to become artists, but it might suggest they don’t see equal opportunities or aren’t encouraged to pursue fine art.
Courtesy of the artist
21st anniversary of the literary organization he founded, Nuestra Palabra. His literary showcase April 3 at the MFAH features the godfather of Chicano literature, Dagoberto Gilb, and a number of other voices. Nuestra Palabra’s lineup features MFAH curator Mari Carmen Ramírez, the founder of the museum’s International Center for the Arts of the Americas. She will be the conference’s keynote speaker. While she has introduced galaxies of Latin American artists to a global audience, local Latinos have never been her focus, frustrating many in Houston’s community.
“If I were working in any other place, they might look at me,” said painter Geraldina Interiano Wise, a native of El Salvador who performs with her brushes and canvas during live, collaborative concerts with area musicians. Wise is among a number of Houstonians asking what a better infrastructure for Latino art could look like in Houston. A major cultural center or museum devoted to Latino art would be a start. “But how do we coalesce?” Wise said. “And if we did, where would the money come from?” A few legacy organizations have been around for years, “but the city has left them behind,” she added. “There’s only so much Ballet Folklorico you can bring.”  Groups must organize to be heard, Wise said. She has put herself out there through LatinAmerican Women Artists, Houston, a group recently established by Glassell School instruc- tor Arielle Masson for her students. They are presenting LAN! Houston events at the George Memorial Library in Sugar Land and the Glade Arts Foundation in The Woodlands. “There’s Latino communities everywhere, and they’re starved for culture,” Wise said, “so doors are opening.”  Spring’s showcases are “an incredible boon for the city to know itself a little better,” Wise said.

Lizbeth Ortiz’s “Looking Up” is among featured works of Houston’s Spring of Latino Arts.
​
The work of about 50 local artists will appear on billboards across the city that were funded by UH and Clear Channel. Though that outreach was deliberately democratic, curated shows at area galleries and muse- ums offer a deeper dive. University of Houston- Downtown’s O’Kane Gallery has hung “Close to Home: Latinx Art and Identity,” a marvelous show of prints and paintings by several generations of U.S. Latinos that combines iconic imag- es and up-to-the-minute works by important new- comers.
The show’s 56 works are from a group of 100 given to UH-Downtown by San Antonio’s Harriett and Ricardo Romo, major collectors who have focused on Latino art — especially works on paper — since the 1970s. O’Kane director, Mark Cervenka, who curated the show, plans to hang the prints across the UH-Downtown campus after the exhibition closes.
Awash in bold color and graphics, the works convey themes of empowerment, rendered in diverse styles that express Latinx identity as specific, powerful and Latino Art Now! Spring of Latino ArtMore than 70 cultural venues across the Houston area are staging programs, exhibitions and performances through May 31. details:iuplr.org/lan-events ancient. Giants such as Frank Romero, Carlos Alvarez, Patssi Valdez and Luis Jimenez are in the mix along with younger power- houses Michael Menchaca (known for his animated videos based on ancient codex imagery) and Vincent Valdez, a master draftsman.
Cervenka has grouped a number of prints from legendary workshops such as Los Angeles’ Self Help Graphics and Modern Multiples and Austin’s Coronado Studios. Prints have been integral to the evolution of Latino and Chicano art because they’re often produced at community- minded ateliers who offer artists an inexpensive out- let, Cervenka said. “It’s about making work that’s honest and sincere in terms
of their own vision.”
At Rudolph Blume Fine Art/Artscan Gallery in Montrose, the show “Artimañas /Revealed” features politically and socially minded contemporary art in a mix of mediums by Texas artists Celia Alvarez Muñoz, Casey Arguelles Gregory, Rabéa Ballin, Jesus Gonzalez, Cristy Jadick and Gabriel Martinez. (Artimañas translates as “sleights of the hand.”)  Jadick fills most of a room with the installation “Wall.” Its cinderblock centerpiece is surrounded with a micro-desert and stenciled with text borrowed from the Statue of Liberty’s famous inscription, “Bring me your tired, your poor ...”  In his evocative video “Ramas de mezclilla (denim branches),” Gonzalez walks toward the Texas-Mexico border carrying a huge, yellow sail, amid backpack sculptures made of denim, as a narrator reads Mexican poet Alberto Blanco’s verse, “My Tribe.”  Muñoz’s Las Mordidas: El Poder del Privilegio (The Bribes: The Power of Privilege)” — a 15-by-15-foot print on vinyl mesh — is too large to unfurl completely in the space, but viewers quickly get the gist: It layers dense text about the unsolved murders of women in Juarez, Mexico, over imagery from the Mexican flag.  Photography by Houstonian Francis Almendárez, another of the “Art and Politics” panelists, will be up soon in “Nuestro Hogar,” a two-person show at Jonathan Hopson Gallery that tackles identity questions from a more intimate, domestic perspective. Curator Debra Barrera, who also is a well-respected Latina artist, co-owns Hopson with her husband. The gallery oper- ates from the front rooms of their Montrose residence.  Barrera would have done “Nuestro Hogar” regardless of the LAN! hooplah, she said. “I think a lot about home space. It’s the first curatorial space we encounter, the first aesthetic we see.”Her own work often riffs on the experience of growing up in a modest home in Corpus Christi as the daughter of Mexican-Americans. Almendárez and the show’s other artist, Ana Fernandez, explore similar themes from different directions, as gay individuals.