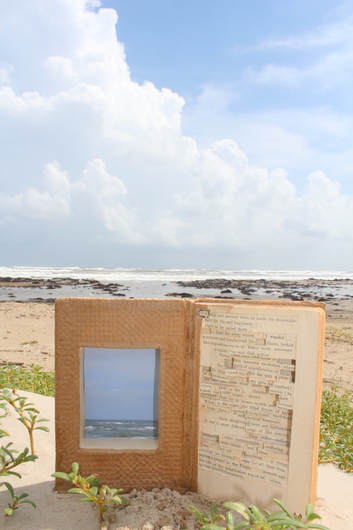 INTERVALS  MARIA CRISTINA JADICK  -ARTIST STATEMENT
"Give me your tired, your poor,  Your huddled masses yearning to breathe free,
The wretched refuse of your teeming shore.   Send these, the homeless, tempest-tost to me,  I lift my lamp beside the golden door!"
Excerpt from Emma Lazarus’s sonnet, The New Colossus, which is emblazoned on a brass plaque inside the Statue of Liberty on Ellis Island.  Paul Auster said: “’The New Colossus' reinvented the statue's purpose, turning Liberty into a welcoming mother, a symbol of hope to the outcasts and downtrodden of the world".
Many Cubans, vying for a chance at freedom and a better life for themselves and their family members, have constructed makeshift rafts from salvaged objects putting them to sea in order to escape the desperate conditions of their Cuban homeland to head for the U.S.  They are called “Balseros.”  Boarding these potentially unseaworthy rafts to travel across rough seas, treacherous currents, and shark -infested waters between Cuba and Florida, they pursue a dream of salvation through exile.
The Balsero’s rafts and their life-altering function, become a symbol of hope, creativity and imagination when those that reach American shores are able to seek refuge in the United States and ultimately build successful lives in their new homeland, but they also become a symbol of wretchedness when many Cuban rafters dreams are dashed as they are intercepted and repatriated back to Cuba, or are tragically lost at sea.
My work expresses this conflicting duality of cornucopia and despair, a narrative familiar to exiles the world over.