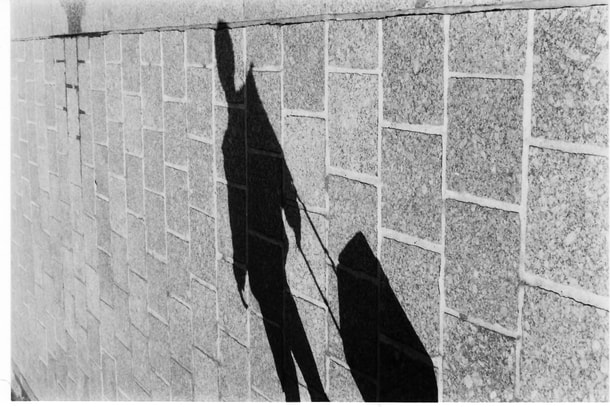 Connection Disconnection, a photo-essay installation commissioned for the "Fotofest 2000 Biennial," addressed the topic of “urban dislocation.” It was installed inside a large retail window space at Foley's, a big chain Department Store.  It incorporated bricolage, a performative, shadow photo-essay mounted on foamcore, a few objects suspended from the ceiling, and a black and white, shadow performance video playing on a tv monitor that sat on a pedestal.  Its floor was covered in 200 lbs. of dried, yellow corn seed along with
pieces of a large, unfinished puzzle. The video, which was produced by the Artist, was a composite of shadow photographs taken of anonymous people encountered amidst the architecture and cityscape that they inhabited during her sporadic site visits to downtown Houston.

Connection Disconnection
Connection Disconnection
How does one connect with other people in such a large city
when the pace is so rapid
and everyone seems to be rushing around
trying to get to the next urgent demand on their time that needs addressing?
So, despite many people being in close physical proximity to each other,
isolation,
alienation.
The people look at each other as they pass by,
walking or running, but not making eye contact and not really seeing each other.
There is no connection, there is a disconnection,
a kind of anonymity between each other which takes place
and which may or may not be intentional but which happens all the same,
time and again
the gap ever widening