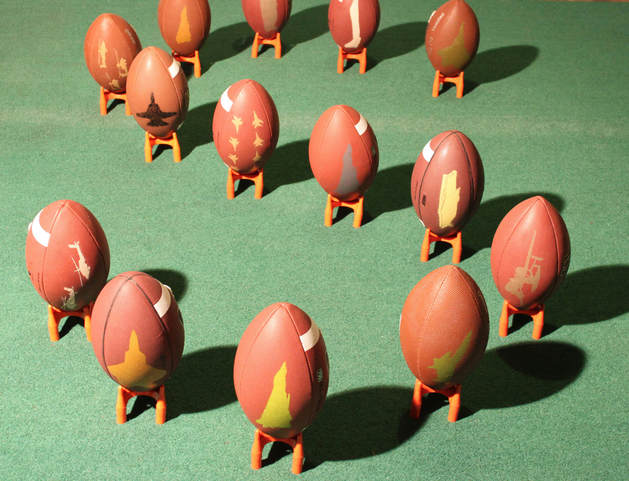 In Ready to Rumble? Maria Cristina Jadick employs assemblage, photography, printmaking , performance, video and American iconography to form installation tableaux and mixed media works that engage viewers in interactive dialogue about U.S. Foreign Policy and the conflicting ramifications of U.S. influence in the world.  Using language and material from the kitchen, football and the military, Jadick creates visual narratives.  The narratives reflect a range of experience, from the individual to the universal, and ask viewers to ponder and comment on geopolitics, popular culture and consumerism.  Familiar objects placed in new contexts become ventriloquists as they speak ominously of the threatening and dangerous consequences that may result wherever economic, military and political power is exercised.

​    She encourages Americans to talk about important issues, but in an environment of inquiry and understanding, rather than one of dispute and disagreement.  She asks viewers to “ State your case, whatever it is, and may we all learn something from each other!"

Jadick's motivation to make this body of work evolved as a consequence of her perception that our government's decision to invade Iraq, was seemingly made without significant public debate, and as a result of a national fear unnecessarily stoked by an unsubstantiated evidentiary threat from weapons of mass destruction.  Weighty questions continue to loom large today regarding the direction U.S. Foreign Policy will take as it pertains to Afghanistan, Iraq, and the greater Middle East, making this subject more topical than ever.

Ready to Rumble? is meant to provoke conversations; to get sides talking.   Each of Jadick's installation performances allude to multiple opposing perspectives.  Note, the consequences of any foreign policy decisions made and acted on in that area costs human lives.
​