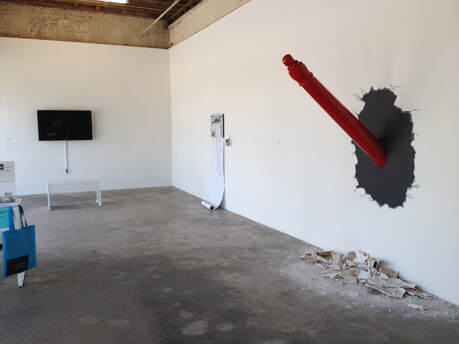 Compenetrate, was created for the Artist Board Member Group Exhibition, "L’Esprit de L’Escalier"at the Diverse Works Art Space, in Houston, TX  from June-August 2013.  The French term, L’Esprit de L’Escalier, means: "a witty remark that occurs too late, or a message whose incongruity has the power to evoke laughter."  For her work, Jadick chose to address the latter meaning in a personal context.

She created an outsized replica of a vintage 1950's meat tenderizer, (which is a humble, common tool from the kitchen,) and used it to symbolically break a large hole in the wall of a Contemporary Art Space that is both youth oriented and alternative. Having used vintage meat tenderizer tools in the past as a means to comment on U.S. Foreign policy; (i.e. when she tenderized steaks in the shape of middle eastern countries,) she decided to revisit use of the material but with a new approach and context.

Her piece Compenetrate, attempts to comment in a humorous way about an Artist, Mom, Housewife of advancing years and her sense of belonging in this incongruous art milieu. The international contemporary art scene typically highlights or promotes younger, single Artists recently out of Graduate School as being the most promising for future success, or alternatively, established Artists whose reputations loudly already speak for themselves.  She chose the title Compenetrate for her work because it means "to pervade throughout."  As such, it perfectly describes Jadick's belief, that despite her age and various domestic personal identities in life, that she truly and legitimately belongs everywhere regardless of societally limiting expectations.